Alario is a Dolcetto specialist, producing grown-up, substantive versions of the often-overlooked variety in Piedmont.  Helpful too, are their beautiful labels, evocative of the celebrated scenery of the Langhe hills. That’s the backdrop to the history and activity of this small family business, founded in the early 1900. For three generations they have dedicated themselves to the care and cultivation of vines.

The winery dates back to the 1900’s when Claudio’s grandfather was supplying grapes to other wineries. Three generations later Claudio had the conviction (and, as it turns out, ability) to produce very fine wines of his own from the family’s prime vineyards in Verduno, Serralunga d’Alba and Diano D’Alba. He is respected as one of the finest producers in Diano D’Alba.  Having trained at the Istituto Superiore di Agraria in 1988 his first wine was a Dolcetto, a grape that has remained his first love. This was followed by Barbera, Nebbiolo, and, in 1995, his first Barolo. He now produces no fewer than three separate, single vineyard versions. From his beguiling Dolcetto to the complex yet approachable Barolo Riva which has won accolades to rival many of the region’s finest, his wines are invariably beautifully made, marrying profundity and richness to accessibility. 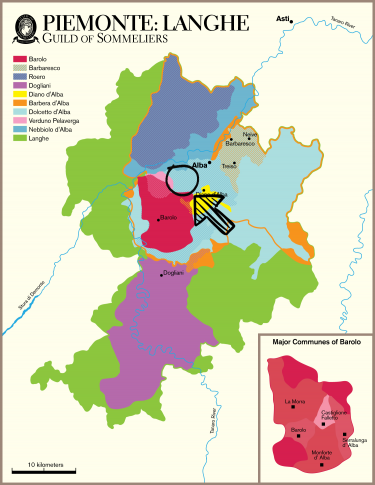 We discovered these wines on the floors of Vinitaly back in 2012. My intrepid and seasoned wine veteran Mark Bowery was indefatigable in exploring the halls of Piedmont to find smaller, lesser known producers that were making great wines. A recommendation by a friend, Giorgia, who has subsequently helped us find many other producers in the RWG portfolio, lead us to Alario where we were absolutely floored by their Dolcettos and Brunellos along with the kind hearted and thoughtful Alario family.

HISTORY: Piedmont has fostered a serious winemaking tradition since the Middle Ages. Early references to Nebbiolo wine were documented in 1266. Formerly part of the Savoy kingdom, French influence is still evident today, particularly in the region’s cuisine and wine culture. Piedmont was a key player in the Risorgimento, leading the charge for Italy’s reunification in the 19th century.

TODAY: There is a new generation of high-quality wines. As a wine region, Piedmont has had enormous success cultivating its own indigenous varieties to the highest expressions and quality levels.

TERROIR: Moderate continental climate, protected by the Alps to the north and from weather systems coming from the Mediterranean by the Apennines. Variations in soil composition, altitude, and aspect combined with the sub-mountainous landscape contribute to a range of mesoclimates throughout the region. Calcareous clay, sandstone, sand and even limestone can be found. The fog is the key factor to this area and it is believed the grape name Nebbiolo gains it’s name from the Italian term ‘La Nebbia” which means “fog”.