In 1698, Simon van der Stel granted farmland to Hendrik Sneewind. Later, the farm changed hands to Captain Diemer when he married the widow Sneewind, and thus Diemersdal was formally established. Making wine runs in the family at Diemersdal. Six generations of winemakers with one passion have made fine wines at the Estate since the 1800’s. More than 12 decades later, Diemersdal is a well-known landmark in the lush Durbanville Valley, one of the Cape’s oldest wine regions, as well as building a worldwide reputation for its reds and whites. 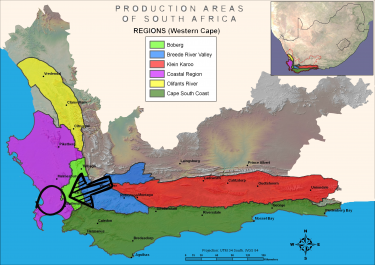 An old friend named Chris Majer stumbled upon this producer. At that time we had not found an appropriate partner in the So. African region, but Chris was a trained chef with a great palate and recommended I try this producer. Upon tasting the wines I realized that we had found the missing link and this was it.

HISTORY: South Africa is one of the most prominent wine-producing countries in the Southern Hemisphere. With more than 300 years of winemaking history, it is often described as bridging the gap between the Old World & New.

TODAY: A vast array of wine grapes may thrive there depending on proximity to the coast, so expect to see an interesting array of varietals, including brilliant whites and poised reds.

TERROIR: Warm Mediterranean climate, however among the least “warm” of the country’s regions. Most of the grape growing areas are cooled by proximity to the ocean and the main cooling influence of the Benguela current. The dominant soil types are granite, shale and sandstone.