Sam Patterson’s mother got him a subscription to a wine magazine during his college years. After reading the classic enology textbook “Wine: An Introduction,” by Maynard A. Amerine and Vernon L. Singleton of UC Davis, Sam transfered to UC Davis, where he earn a combined degree in viticulture and enology in 1998.

His first job was at Charles Krug Winery, and in 2001 became director of vineyard operations for Renwood Winery in Amador County, a position he held until he established his own vineyard-management company in 2006.

Sam and wife Kimari made their first wine in a small building on the site, but then outgrew that space and began to produce wines elsewhere before building a dedicated winery on the property in 2013. It is here, in a remodeled farmhouse in California, where they produce outstanding Sauvignon Blanc, Tempranillo, Petite Sirah, Zinfandel and Grenache from their organic and sustainable vineyard. 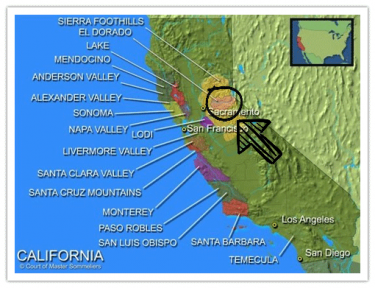 HISTORY: Dates to the California Gold Rush of the mid-19th century. The arrival of thousands of thirsty European immigrants created an explosion in the demand for wine; by 1870 the county was the third-largest wine region in California.

TODAY: El Dorado offers nearly 100 distinct varietals because of it’s unique positioning. The terroir of El Dorado AVA is an infinitely complex one which allows for a broader range of plantings.

TERROIR:  Located in the foothills of the Sierra Nevada Mountains east of Sacramento, vineyards are found with elevations between 1,200 feet and 3,500 feet. The region benefits from the cool breezes that come off the mountains and push hot air off the vines and down to the valley. Five major agricultural soil types and hundreds of sub types are found here, many influenced by the presence of decomposed granitic and volcanic material.