Why California’s 2020 Lightning Fires Got So Big So Fast 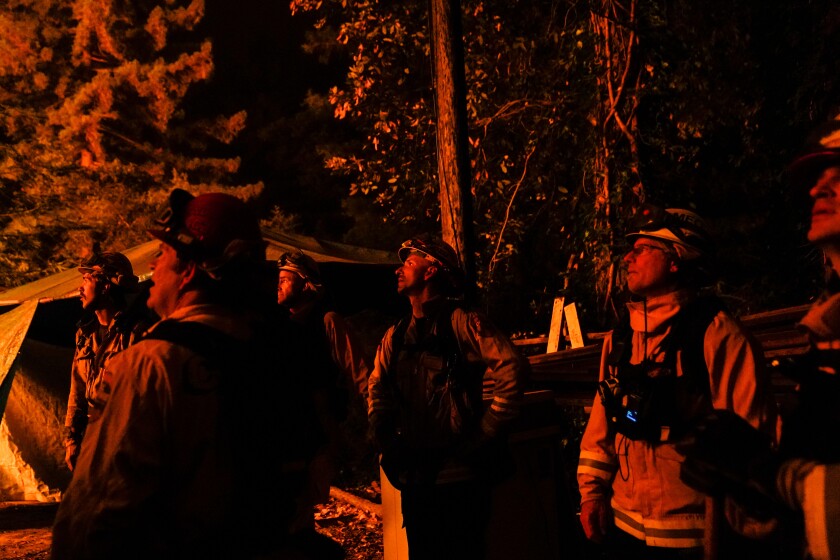 When state fire authorities announced recently that the CZU Lightning Complex fire had quadrupled in size in just one day, an audible gasp rose from the audience.

Although lightning fires have been scorching the state since prehistoric times, the speed with which the SCU and LNU lightning complex fires became the second- and third-largest blazes ever recorded in California has startled emergency officials and strained firefighting resources. The fires have killed seven people, destroyed more than 2,100 buildings and made air unhealthy across the Bay Area.

And things may only get worse in the future, experts say.

“There’s a direct relationship between heat and fire, and increasing heat is inevitable for at least a few decades,” said Michael Gerrard, director of Columbia University’s Sabin Center for Climate Change Law. “If you like 2020, you’re going to love 2050.”

So why have this year’s fires burned more than 1.4 million acres of the state’s scenic coastal mountains and hills surrounding wine country? After all, the Lightning Siege of 2008, when nearly 800,000 acres burned, was the first time the National Guard had been called in to help in 40 years as resources were stretched to the limit.

The answer is complicated.

The destiny of all wildfires is shaped by the fire behavior triangle — fuel, weather and topography — according to Craig Clements, a professor at San Jose State’s Fire Weather Research Laboratory.

But there were additional factors involved in this most recent outbreak. A summer heat wave magnified by climate change combined with tropical moisture and storm energy to create thunderstorms. The resulting lightning strikes pelted a region with a history of difficult firefighting and another area that’s seen numerous fires in the recent past. 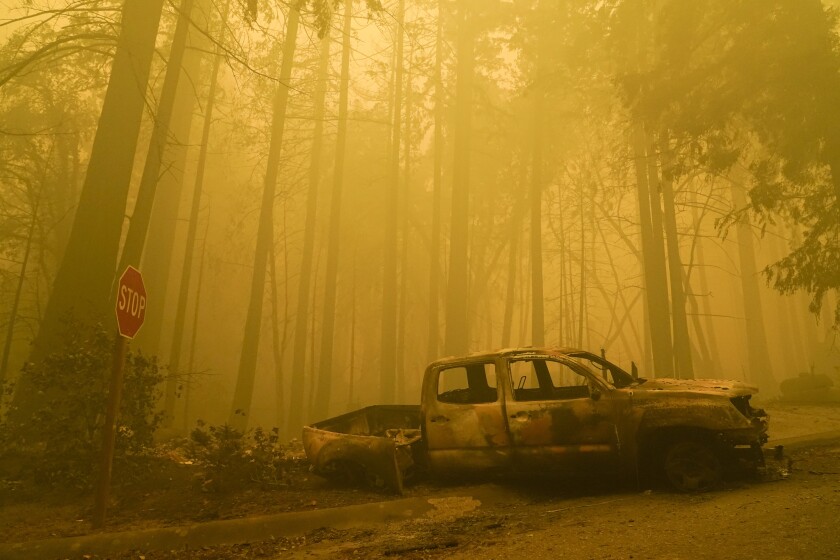 A Burned vehicle sits in front of a fire-ravaged residence in Boulder Creek as smoke from the CZU Lightning Complex fire fills the sky.

The state- and locally-maintained coastal mountains in Central California, where the CZU Lightning Complex is burning, have a history of challenging firefighters. In 2016, in Monterey County north of the current fire, a firefighter died helping contain the stubborn Soberanes fire, which burned 50 homes while flames lived for months in the range’s steep canyons and impassable terrain.

In 2003, south of Livermore, where a part of the SCU Lightning Complex is now burning, 53 firefighters were overrun in the middle of the night and used their shelters in what may have been the second-largest shelter deployment by crews in U.S. history, Clements said.

In both instances, just as is happening now, temperatures did not drop significantly overnight nor was any ocean moisture reintroduced into the landscape’s higher elevations. In the summer, a high-pressure system settles over the Pacific and rotates, steering warm, dry air over the coastal range’s upper elevations while squeezing cool, moist air into the marine layer below, said San Jose State atmospheric scientist Alison Bridger.

“It’s basically why we don’t get rain in the summer,” she said.

“The fact we got such extremely large, fast destructive fires without any offshore winds is very unusual,” said UCLA climate scientist Daniel Swain. “All of this hints at something which we know to be true … the state of the vegetation, the state of the fuels was pretty extraordinary.”

In fact, most of the areas burning in the three lightning complex fires are considered to be in moderate to severe drought, according to the most recent U.S. Drought Monitor report released Thursday. Huge chunks of each fire’s footprint include areas that haven’t seen fires in decades and were jackpots of dead and dry tinder.

“Unfortunately, as the climate continues to warm, the table is being set for these extreme fires more often,” Swain said. “It means the ceiling on how bad these fires can be is continuing to increase.”

The night that the hundreds-of-miles-wide lightning storm set all these fires in motion, a “heat burst” before sunrise hit parts of wine country, sending predawn temperatures in areas such as Travis Air Force Base from 80 to 100 degrees in under two hours. While experts say it probably didn’t have a direct impact on the fires, it certainly didn’t help matters and foreshadowed the challenging conditions to come.

From Tuesday to Wednesday, winds flowed downslope into the Sacramento Valley from the mountains between Oregon and California, shedding moisture along the way. When they hit the wine country hills, they were bone dry and influenced the fire’s explosive growth, said National Weather Service meteorologist Cory Miller. The LNU Lightning Complex fire grew tenfold in 36 hours, from 12,200 acres the morning of Aug. 18 to 124,000 acres the following night, according to the California Department of Forestry and Fire Protection.

Sarah Johnson and the Emerald Hills Horse Ranch, in Winters, were in the fire’s path.

Johnson, 29, is originally from Ohio and knows thunderstorms, so two weeks ago she kicked back in a hammock to enjoy a flavor of the Midwest as lightning flashed across the horizon around Lake Berryessa and Mt. Vaca.

But soon, the storms were replaced with smoke, and then falling ash. Johnson and her boyfriend were glued to their phones, listening to scanner traffic from first responders about the fire’s movements. The California Department of Forestry and Fire Protection website was working only intermittently, overwhelmed by a surge in web traffic from around the globe.

As the fire made its late-night surge Aug. 18 and 19, Johnson’s boyfriend’s phone began ringing incessantly, the ranch’s boarders trying to reach him to warn him of the incoming fire.

The couple woke up and sprung into action, waking neighbors, loading up horses as trailers arrived and helping to knock down small spot fires that dotted the ranch pasture. The ranch lost power sometime during the scramble.

“It was incredibly windy and smoky and you could see a fire tornado forming, and the rate of spread was incredible,” Johnson said. “The fire was just so bright, that’s how we were able to see everything.”

“I remember at one point I just stopped and looked and said, ‘Where are all the fire trucks?’ and it was just another surreal moment and I realized that nobody was coming,” she said.

There’s a concern that as these fires hit the same areas again and again, they’ll permanently change California, and not for the better.

A moderate fire can clear out underbrush and competing trees, giving a healthy forest room to breathe. But if it visits again and again — as has happened in parts of Napa County in recent years — those native grasses and plants give up the fight and invasive plants move in, similar to what’s happened in Southern California. Oftentimes those new species can spread fire faster.

California has choices to make since fire is inevitable and megafires are increasingly possible, said Gerrard, the Columbia climate law director. Building codes can be updated. Utility infrastructure can be modernized and better regulated. Decisions on where homes are built and how forests are managed can be made with fire risk and native ecology in mind.

“It’s very much like managed retreat on the coastline,” Gerrard said. “The hope is that recurrent, related disasters will be a wake-up call.”